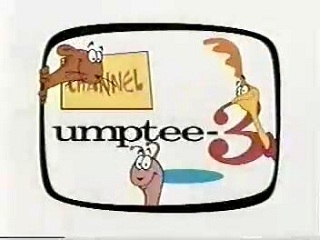 One day, as Ogden O. Ostrich took his head out of the ground, he took a look at the world and everything else around him and declared it a magical place. Together with his partners Sheldon S. Cargo and the mute Holey Moley, travel the world in a van broadcasting on the underground station "Channel Umptee-3", educating everyone on the wonders of the world and everyday things normally taken for granted. But an evil box manufacturer led by Stickley Rickets ("The Frumps" as the CU-3 team calls him) want to take those "Umptee-doodies" off the air, believing that they are a threat to his business.

Channel Umptee-3 was an Edutainment Show that aired on Kids' WB! from 1997 to 1998; legendary TV producer Norman Lear helped create the show. Unfortunately, some real-life Frumps got wind of it and it was yanked after 13 episodes.