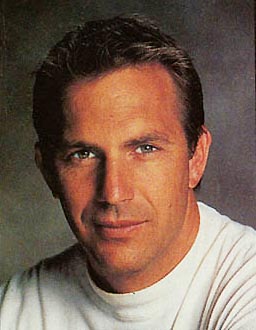 Not to be confused with James McGill
"When I played Robin Hood, I knew the great role was Alan Rickman's and it didn't bother me. I always think that leading actors should be called the best supporting actors."
Advertisement:

Kevin Michael Costner (born January 18, 1955 in Lynwood, California) is a multiple-Oscar-winning American actor/director/producer and honorary member of the Sioux Nation, perhaps best known for Dances with Wolves, for which he did all of those things. Quite popular during the late 1980s and early 1990s for starring in films such as The Bodyguard, The Untouchables (1987), Robin Hood: Prince of Thieves, Bull Durham, Field of Dreams, Tin Cup, Wyatt Earp and Oliver Stone's JFK.

In the mid-to-late 90's he hit a slump with lesser received movies, starting with Waterworld, an After the End Science Fiction blockbuster which was fraught with production problems and ended up being the most expensive movie ever made at its time, only to flop in the United States. However, it eventually made its money back worldwide. The Postman was similarly received, although both films have been looked more fondly in later years.

After starring in 3000 Miles to Graceland, in the 00's and past, Costner has earned his reputation back with lower-key films such as heroic Coast Guard rescue film The Guardian, the historical thriller Thirteen Days, the western Open Range and the cerebral Serial Killer drama Mr. Brooks.

Most recently starred in the 3-part miniseries Hatfields & McCoys based on the infamous backcountry feud on The History Channel and had a supporting role in Hidden Figures.