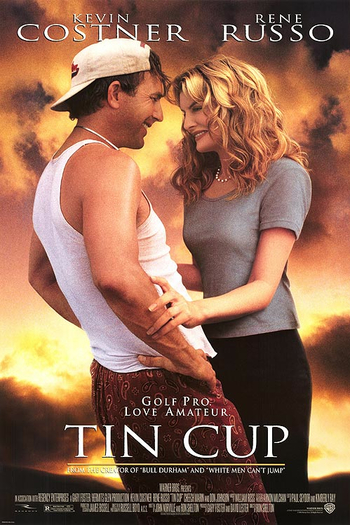 "When a defining moment comes along, you define the moment or the moment defines you."
— Roy McAvoy
Advertisement:

Roy McAvoy (Costner), known as "Tin Cup" in his golfing circle, is a former golf prodigy content to spend his days with his pals, drinking and hitting golf balls at the rinky-dink Texas driving range he owns. Years ago, Roy burned his chances at qualifying for the PGA Tour because of his Challenge Seeker tendencies, forgoing safe shots in critical moments for near-impossible ones, trying to set record scores, and flaming out in spectacular fashion.

Roy's easy-going life is turned around when beautiful psychologist Molly Griswold (Russo) comes in looking for golf lessons. Roy attempts to put the moves on her until he finds out she's already dating his long-time hated rival from college, David Simms (Johnson), a top PGA golfer. When Roy embarrasses Simms at a local tournament by effortlessly hitting a difficult shot that David wouldn't attempt, he sees an opportunity to topple his old foe and capture the doctor's heart: qualify for — and win — the upcoming U.S. Open. As Roy starts to carve out an incredible comeback to golfing prominence with best friend/caddy Romeo (Marin) at his side, and begins to win over Molly (working as his sports psychologist), he may finally have a shot at a true defining moment that once escaped him.

Co-written and directed by Ron Shelton, who helmed sports classics Bull Durham and White Men Can't Jump; like those two films, Tin Cup was applauded for its intelligent and hilarious take on athletic egos, its well-drawn characters and romance, and wonderfully turning formulaic sports tropes on its head.