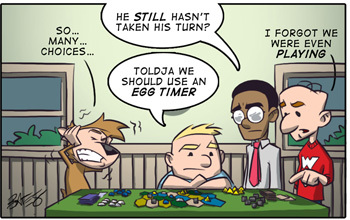 "There are more possible games of chess than there are atoms in the universe. No one can possibly predict them all, not even you. Which means that the first move can be terrifying. It's the furthest point from the end of the game, there's a virtually infinite sea of possibilities between you and the other side... but it also means that if you make a mistake, there's a nearly infinite amount of ways to fix it. So you should simply relax, and play."
— Harold Finch, Person of Interest, "If-Then-Else".
Advertisement:

It's the final quarter. The game is still too close to call. The clock is counting down. There are seconds to go. You have the ball. It's all up to you. And you stand there. Think back to your training. Analyze the best response. And do absolutely nothing in the meantime.

Expert athletes often talk about getting in "the zone", when they stop thinking about what they're doing it and just do it. This usually leads to perfect performances that crush the other team easily.

Choking occurs when, instead of getting in the zone and shutting off the thinking, the expert starts thinking about what he's doing. He starts trying to control everything, trying to account for every last variable. He gets in his head and because there's just too much to think about, he can't do anything. He's got the yips or, as The Other Wiki calls it, focal dystonia.

Compare with the Centipede's Dilemma. Contrast Awesomeness by Analysis.