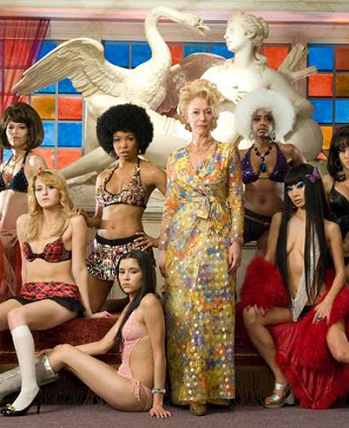 "No problem, man. Now go see Miss Kitty and she'll set you up with a nice hooker."
— Chandler, playing barkeep to Joey dressed as a cowboy on Friends.
Advertisement:

"Miss Kitty" is an older woman who runs a brothel. She's charismatic when necessary, but has no tolerance for rowdiness in her establishment and very often has a shotgun handy to make certain that her policy is enforced. She goes out of her way to make certain that no-one mistreats her girls, and she runs a tight ship with them as well. She acts as mother-confessor for anyone in town and always has time to provide people with advice and common-sense wisdom. Occasionally, Preacher Man berates her for operating a Den of Iniquity, but most of the time he accepts her business as a necessary evil (assuming he's not secretly a regular customer).

Initially, Bowdlerization restricted her activities to running a saloon or managing a burlesque house of dance hall girls, with only the implication that they're ladies of the night. In the 1950s, the dance hall girl manager role was used as a justification to add a burlesque song to a film. In today's media, it's usually much more obvious that she's running a brothel with ancillary booze service.

If the two are close in age, she will be the love interest of The Sheriff or the U.S. Marshal. She is the employer of the saloon girl and The Piano Player. The Bartender is always her trusted subordinate, if she employs one.

Miss Kitty is a staple of The Wild West and other types of frontier fiction. In fact, the trope was so pervasive in Western Canada in the post-World War I era that the phrasing "Miss Firstname" was (and to some extent, still is) used only to refer to madams and whores. This naturally surprises visitors from the southern US, for whom this phrasing is a respectable way to refer to mature women. Hilarity can ensue.

The Trope Namer is Miss Kitty, the proprietor of the Long Branch Saloon in Dodge City in Gunsmoke. Should not be confused with the burlesque dancer in The Great Mouse Detective or former WWE Diva Stacy Carter, who used this name before changing it to The Kat.

Has nothing to do with Cat Girl.