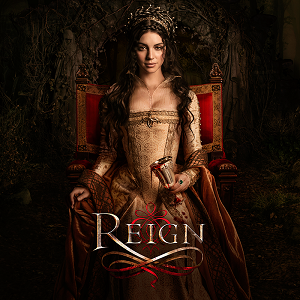 "Since Mary, Queen of Scotland was a child, the English have wanted her country and her crown. She is sent to France to wed its next king, to save herself and her people, a bond that should protect her. But there are forces that conspire. Forces of darkness, forces of the heart. Long may she reign."
Advertisement:

Reign is a CW television series that premiered October 2013, and ended in June 2017, concerning the young adult life of Mary, Queen of Scots. After a would-be assassin discovers her hiding in a convent, Mary flees to the protection of the French court. She hopes that by honoring her childhood engagement to Francis, the future king, she'll be able to protect her country and herself.

But it's not clear sailing at court. Queen Catherine has been warned of a prophecy foretelling her son's imminent death if he marries Mary, and she'll do anything to prevent it. Francis and King Henry are not keen to bind themselves to Scotland unless it benefits France. Henry's illegitimate son Bash is hiding something. And there's a mysterious woman called Clarissa haunting the castle, who seems to have Mary's best interests at heart...