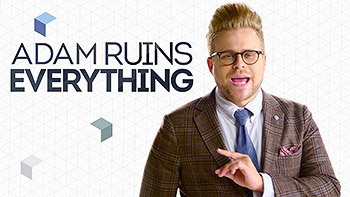 Adam Ruins Everything was an informational comedy on TruTV that aired from 2015 to 2019, hosted by CollegeHumor alumnus Adam Conover. In each episode, Adam plays a know-it-all with fourth-wall-breaking powers who barges into other people's lives and pesters them with harsh truths. It's similar to Penn & Teller: Bullshit! in content, if not in tone. A tie-in book was released on April 10, 2018.

open/close all folders
A to F
Advertisement:
G to M
N to S
T to Z
Feedback