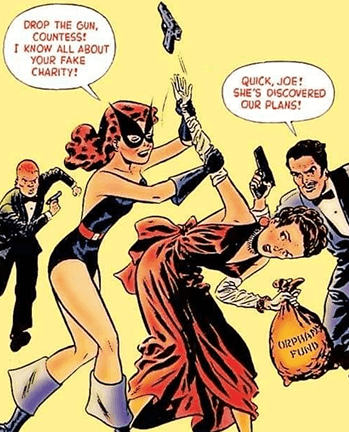 "Charity has become so industrialized now that a bunch of rich assholes can throw a charity ball, charge $5,000 a head, and spend most of that cash on caviar-spewing ice sculptures. I can't trust charities anymore. Like a wino, I just expect them to take my twenty bucks and spend it on MD 20/20."
— Drew Magary,

People can be persuaded to give money to strangers surprisingly easily, if they believe that the money is going to a good cause — like a charity organization. Jerkasses and bad guys will often take advantage of this by claiming to be collecting for a charity, when the fact is, they're keeping the money themselves. A Con Man may also use a fake charity, or lie about being a representative of a real one, as the tale to help part a fool and his new money.

From easiest to most involved and labor-intensive, the most common forms are:

Besides a simple desire for money, Fake Charities can also be used as an front for other activities, or a way to drum up resources for some other plan.

May backfire on the guilty parties, or not. Larger versions are likely to either be filled with Unwitting Pawns, or a bunch of cynics who are in on the con along with a lone believer in the charity. See also Poe's Law. May also include Faking Another Person's Illness. Taking it to the next level may result in a Scam Religion.

This is unfortunately Truth in Television, but there are many guides to recognizing fake charities and scams soliciting donations. Various "watchdog" sites such as Charity Navigator,

rate real-life nonprofits on their transparency, accountability, and efficient use of funds.

Contrast with Involuntary Charity Donation, which is when people coerce you into giving to a real charity.

"A portion of proceeds goes to charity."

"A portion of proceeds goes to charity."