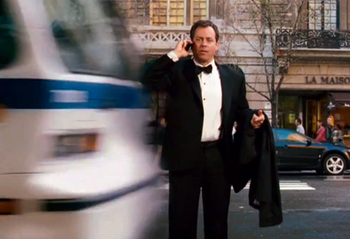 A specific variant of Dropped a Bridge on Him. A character runs across the street without checking for oncoming vehicles, usually because of someone chasing him or something. Often, he attempts to provide the last word in the argument by turning his back to the opposite side of the road. Without warning, a bus or car wheels in from the side of the frame and slams into him, crushing his bones into the dust of death. Often it seems the vehicle was moving pretty quickly for the road it's on. The guy who left his common sense behind in the heat of the moment is Killed Off for Real to provide Anyone Can Die shock value. Or, it can make for comedy with its abruptness.

Plus, it's a kind of Karmic Death. Remember, folks: you were taught in elementary school to Look Both Ways before crossing the street!

Interestingly, the driver almost never slows down (if they try, they will brake so hard that their wheels lock up and they end up not slowing down anyway) and never swerves, even if the person was in the street long enough for them to react. If the victim is "lucky" they might just honk (might). This, however, can be often a case of Truth in Television. Drivers are humans, not automated machines, and a quick and unexpected obstacle that shows up in the car's way, such as someone running, may not give the driver time enough to react and cause a traffic accident. In most fictional instances, especially in Anime, this also results in the driver being rarely if ever seen and usually getting zero repercussions for their actions, be it legally or emotionally.

Among other popular death tropes, Japanese media really likes this one, whether it be for setting up a sudden drama arc, giving a character a tragic backstory where they lost a loved one in this way, or killing some poor sap so they can Reincarnate in Another World. Calling the vehicle in question "Truck-kun" (or its local vehicular equivalent) has become a meme

Can invoke Diabolus ex Machina if done particularly suddenly, or Schrödinger's Gun in video games in which the vehicle crosses your path only if you didn't look first. Nearly always invokes Mood Whiplash. Can sometimes be averted by a Heroic Sacrificial Diving Save. Compare Car Fu, where someone is trying to hit someone else with a vehicle.

The incredibly dangerous roads in Fictionland might explain why Jaywalking is considered as serious as Murder and Arson...

Not to be confused with the film of the same name. If the pedestrian can not only survive it, but shrug it off (usually wrecking the vehicle), it's a case of Pedestrian Crushes Car.