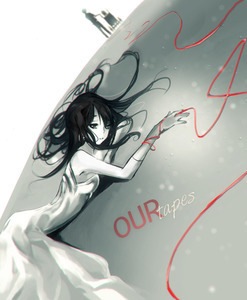 is a K-On! and Hyouka crossover fanvid by Youtubers UmikaSayoji and ZEVS1993. It's set to "Devotion" by Hurts.

Through editing various anime together, the video tells a romance between Mio Akiyama and Houtarou Oreki.

Mio is a shy singer who has a crush on her classmate Houtarou. One day she decides to give him a note telling him to meet her after class. Mio confesses to him and Houtarou accepts. The two begin dating. Later, while meeting for a date, Mio gets hit by a bus. She, fortunately, survives the accident, however she is left wheelchair bound. Mio goes through physical therapy and starts recovering, but it's obvious that it'll be a long road ahead. While watching television, Mio notices that her band has a new lead singer. This upsets her so much that she breaks a gift Oreki gave her. A while later, Mio attempts to kill herself, however Houtarou saves her before she can jump. That same night he proposes to Mio, who accepts.

Our Tapes provides examples of: