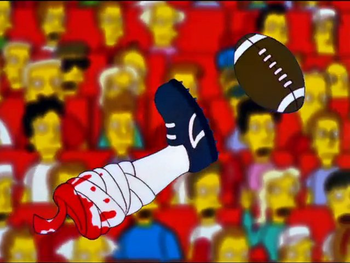 Even in victory, he was still de-feeted.
"I used to be an adventurer like you. Then I took an arrow in the knee."
— City Guards (yes, inexplicably, most of them), The Elder Scrolls V: Skyrim
Advertisement:

A Career-Ending Injury is a sudden and unexpected injury or illness that causes disability to a person and forces them to give up their ambitions and dreams.

Usually, this trope involves an athlete getting an injury, but the career can be anything that requires physical and/or mental ability. Likewise, what causes the disability can be something other than an injury (for example, a disease) — the important point is that it prevents the character from achieving their goals by causing a disability.

A variation is where a previously known condition or illness worsens unexpectedly to a point where the character is no longer fit for his/her career. With a character known for being injury-prone or just too stubborn to know when to quit, this injury may represent the writing on the wall.

Sometimes the injury is part of the backstory, but if it happens during the course of the main story, expect Angst.

Very much Truth in Television. In circles such as the police or the military, this is sometimes sardonically called "earning a desk job". With sports where knee collisions are a regular occurrence, the injury might be so bad that standing up (after it healed) without a cane is impossible.

The injury may have started as a Game-Breaking Injury. Compare White-Dwarf Starlet and I Coulda Been a Contender!, common results of this trope, Dream-Crushing Handicap, where the character is disabled to start with instead of becoming so during their career, and Crippling the Competition, where this trope is invoked. If the character overcomes the injury, either temporarily or permanently, then they're Back in the Saddle. If the injury isn't just career-ending but life-ending, then it's an example of Fatal Method Acting. May result in the character taking on a Post-Injury Desk Job.

Conversely, the Deaf Composer doesn't let a little thing like being physically unable to practice their career stop them from doing it.

This is sometimes set up as a twist or a reveal, so beware of spoilers.