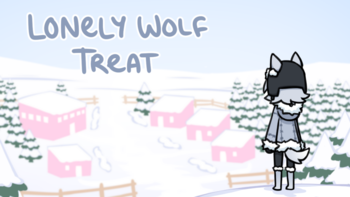 The Lonely Wolf Treat series are RPG Maker games made by NomnomNami and hosted on itch.io. It centers around a group of humanoid animals and their daily lives in a village, dealing with the prejudice around them.

Treat, the titular lonely wolf, is an outcast among the local rabbit villagers, who fear that she will eat them all. Then a friendly bunny by the name of Mochi appears in her life and is the only one to treat her not as a predator, but as a fellow person. The two bond and become Star-Crossed Lovers as the series follows their life and struggle against the villagers, especially Mochi's cousin Juju who despises wolves and will separate them at all costs. Later on, a clever fox, Moxie, and a friend of Treat's, the wandering wolf Trick, also appear and play roles in the story.

The series also includes the following side stories and spinoffs: