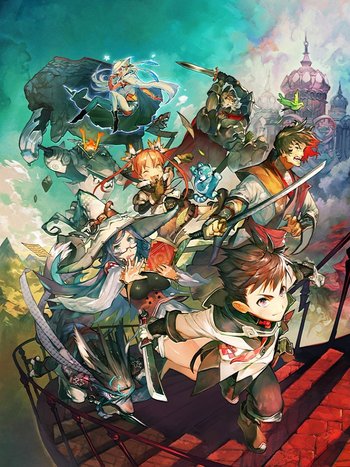 RPG Maker (RPGツクール, RPG Tsukuru), is a series of game maker programs first created by ASCII, then succeeded by Enterbrain, that, as the name suggests, allows users to make their own RPGs.

RPG Maker is known for its ease of use and accessibility. Each version comes bundled with a large amount of graphical and audio resources, and there are many additional resources available in the asset store or on various dedicated websites, so no artistic talent is needed to start off. Its tile-based map and event editor system makes it easy to create areas filled with interactable objects with no programming knowledge required (though an understanding of programming concepts such as variables and loops can help a lot, and later versions allow custom scripting for advanced functionality).

The latest version is RPG Maker MZ. It and its predecessors RPG Maker MV, RPG Maker VX Ace, RPG Maker VX, and RPG Maker XP had received worldwide releases with trial versions available. Older versions RPG Maker 2003 (aka 2k3) and RPG Maker 2000 (aka 2k) weren't originally released worldwide, but were reissued on Steam in English and with several improvements on April 24th and July 7th, 2015, respectively. The very first versions RPG Maker 95 and RPG Tsukūru Dante 98 were never translated into English, however. Three versions were also made available on Sony console platforms; the final one, RPG Maker 3, is available on the Playstation 3 as a PS2 Classic. A version of the program made for the Nintendo 3DS, RPG Maker Fes was released in Japan in December 2016, and was released in the West on June 27, 2017.

After several versions that only used a special interface for inputting commands, RPG Maker started supporting actual scripting languages. The first three versions to do so — XP, VX, and VX Ace — come equipped with Ruby scripting that allows people making a game in the maker to drastically alter the in-game engine, which allows for numerous different types of games (the most common alteration is taking the front-view turn-based battle system that they both come with and changing it into a side-view active-time battle system). The two latest entries, RPG Maker MV and MZ, employ JavaScript as the scripting language, in an attempt to make games produced with it multi-platform (i.e. can be ported to smartphones), the former of the two is also receiving a port to the Nintendo Switch.

The upcoming version, RPG Maker Unite, uses the Unity Engine as a backbone, allowing for ports to various platforms supported by the engine, while still retaining the trademark functionality that makes it popular with developers.

One important thing to note with RPG Maker, at least with earlier versions, is that level-ups and stat growth have much less effect in RPG Maker than in many professionally-developed RPGs. It would require a great deal of trickery to make a game with the very dramatic power escalation of a Final Fantasy title, for instance.

Because of the ease of the program to learn the very basics and how accessible it is for newcomers to get their hands on the many different versions of it, RPG Maker itself has developed a rather low reputation of only being able to make either low-quality, unbalanced grindfests, or DeviantArt-level fetish pornography. This is a rather unfair accusation, though; there are plenty of high-quality games made in RPG Maker, with such games as OFF, Pokémon Uranium, To the Moon, and OMORI being regarded as some of the shining examples of just how great and varied games made in the program can be, when in the right hands.

It is also possible to make non-RPGs in the maker - adventure games and Survival Horror games are the most popular, with the Explorer Horror genre being somewhat of a mix of the two, and not hard to make, while occasionally games in action-oriented genres have been created, though this is more difficult.

open/close all folders
Commercial, no demo
Commercial, with demo/Freeware with commercial remakes or sequels
Freeware
Lost or unreleased games