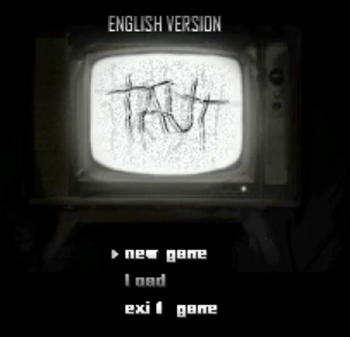 Taut is a 2007 freeware horror game made in RPG Maker, which takes heavy inspiration from Silent Hill in terms of visuals and the movies of David Lynch. It can be downloaded here

; both the original German version, and the English and French translations.
Advertisement:

The protagonist is a little girl, Judith Neelley, who is planning to leave town with her mother soon. Things are packed and they could leave at any moment, but when she gets up on this day, her mother is gone. Thinking nothing of it, Judith whiles away the time. But then, someone breaks into her house. Strange events occur and, frightened, Judith runs away. The entire town is abandoned.

More and more questions arise in her: Where is her mother? And everyone else? Who is this weird creature that seems to haunt Judith? And why do none of these questions seem to get any proper answers?

Confused and seeking refuge, Judith heads to the one place she finds comfort and memories in: her school...