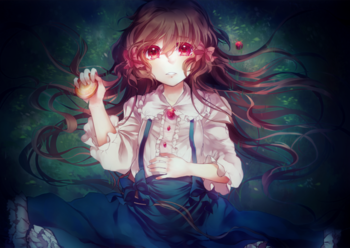 "Hold your memories close to your heart."

is a free RPG horror game made by the circle Astral Shift. The tale begins when a young girl wakes up from slumber and begins exploring her surroundings and figuring out where she is and what her name is. Her only keepsake that clues in on her identity is a pocket mirror and it plays a vital role in the story. The game was released July 22, 2016.