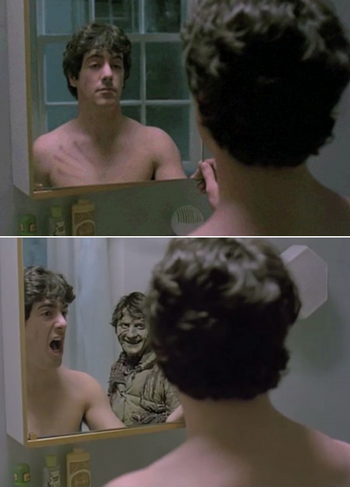 A scene where a reflection is used to suddenly reveal a villain or monster, usually, when the angle of the mirror is adjusted by the victim/protagonist.
Advertisement:

The most common form of mirror scare is the use of a bathroom mirror on a medicine cabinet. As a character goes to get something from the cabinet: we see the character's reflection in front of the mirror, then opening the cabinet, then as they close the mirror again, Bam: they're right behind you!

The exact shot usually holds the camera in place, with our only view of the scene being what is shown in the mirror itself. Variants can use other reflective surfaces, but are usually done in a "safe" environment. TV screens can be used, with the revelation appearing when the screen goes off. (This may well be symbolic of something.) Either way, the character will somehow not have heard their enemy sneak up. Often, the villain isn't there when the victim looks again or looks behind: it's just them going slowly crazy. Sometimes, it turns out they are there after all.

See a video of these examples here

Close sibling to Offscreen Teleportation. Scarier cousin to Stealth Hi/Bye. See also Danger Takes A Back Seat. If the scary thing in the mirror is the one looking into it, it's a Tomato in the Mirror. Subtrope of Toilet Horror, as this almost always takes place in a bathroom.

Not the same as Mirror Monster, which is where the scary thing is part of or only visible in the mirror.