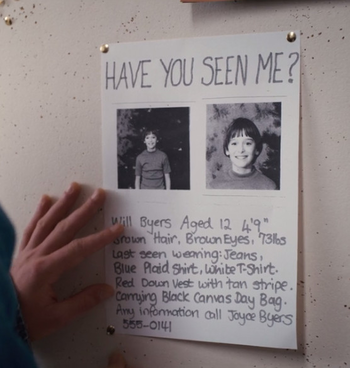 Little Billy is missing, not abandoned, but still without parents or guardians or nanny. Maybe he's wandered off, or turned around and suddenly everyone was gone, or he's just really good at hide-and-seek. But he's missing.

If he's gone missing from school, they might signal a Code Emergency and they will count the kids. They probably also called the police. The responsible adults will be searching everywhere for him, and hopefully found that he wasn't really missing at all, he just needed to go potty and didn't tell anyone.

A logical downside of having Free-Range Children is their tendency to not be where you think they are.

Sometimes, though, the trope can get sinister. Billy isn't just hiding so you don't get mad he ate the last cookie, Billy was taken. In these cases, it crosses over with I Will Find You territory, with the adults going to all ends to get their kid back from a known threat.

This is about the storyline of adults trying to find missing children. If it happens with babysitters around, you can bet they're going to pretend the kid's asleep until they can find them. If it's at the fairground, expect the cheesy music to get creepier as the parents turn around every kid they see.

It may be subverted with the child having run away from Abusive Parents, who are wanting him back to punish him. Usually the heroes discover this before they get the kid back, but sometimes they don't.

Super-Trope to Face on a Milk Carton, which might appear if the kid spends too long missing.

Compare and contrast with The Runaway, which is where a child or teen isn't lost or taken but has left home of their own accord.