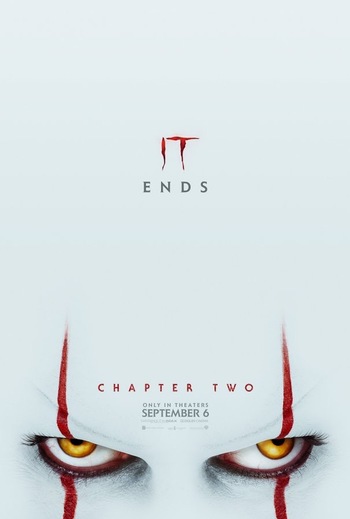 You'll float, two.
"For 27 years, I dreamt of you... I CRAVED you... I've MISSED you! Waiting for this very moment..."
— Pennywise the Dancing Clown
Advertisement:

It: Chapter Two is the sequel to 2017's It and an adaptation of the second half of Stephen King’s classic horror novel.

Twenty-seven years after the events of the first film, the members of the Losers' Club return to Derry to finally put an end to the malevolent force that terrorized them in their youths. While they managed to beat Pennywise the first time, he was only toying with them then; it was the first time he was hurt, ever, and now he is taking off the kid gloves.

In March 2022, a prequel series to the duology, titled Welcome to Derry, was announced for HBO Max.

These tropes float too...

"We need to finish IT. For good."
Feedback

You're just a clown!

The Losers defeat Pennywise by taunting him which weakens him to the point that they can crush his heart.

You're just a clown!

The Losers defeat Pennywise by taunting him which weakens him to the point that they can crush his heart.