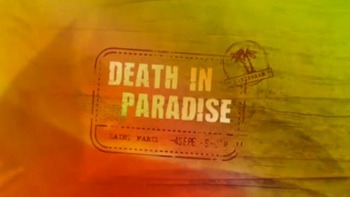 Death in Paradise is a French-British crime drama, created by Robert Thorogood, that premiered in 2011. It is a joint Anglo-French production between The BBC and France Télévisions.

The series focuses on the police department on the fictional Caribbean island of Saint Marie,note The show is produced on the French overseas département of Guadaloupe. a British Overseas Territory. While the police commissioner is a local, the operative police work is led by a British detective, who invariably has to deal with the surprisingly high murder rate while trying to come to grips with the wholly foreign environment he's landed in. He's ably assisted by the local police force while they themselves are trying to figure out their new boss.

DI Parker was preceded by DI Richard Poole (Ben Miller) in Series 1 and 2, DI Humphrey Goodman (Kris Marshall) in Series 3 through 6, and DI Jack Mooney (Ardal O'Hanlon) in Series 6 through 9.

The show has a revolving cast of regulars, and none of the four main cast from the first series are still part of the lineup. Only the recurring characters Commissioner Patterson and Catherine Bordey (mother of one of the original detectives, and later Mayor of Saint Marie) remain from the premiere.note There's also Harry the lizard, but he isn't a credited role.

Thorogood has also written a series of novels which feature the original line-up from the first two series.