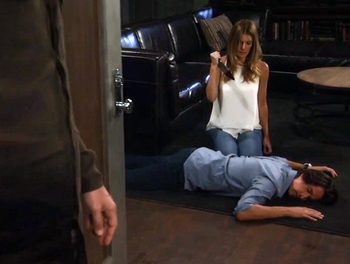 She didn't do it. No, really.
Advertisement:

In Detective Drama and other types of Mystery Fiction that focus on finding the culprit of a particular crime, the plot often follows this particular pattern:

This plot formula is typically used in fair-play whodunnits and other types of mysteries where there are several suspects. The obvious suspect functions as a Red Herring, and the story often culminates with The Summation, where the unexpected culprit and the reason why they committed the crime are revealed.

Writers like to use the above formula because it adds a twist to the story. Discovering the culprit becomes an interesting puzzle instead of the detective simply finding the number one suspect and arresting them. However, this trope has become so common that the audience is now used to it, which means they pretty much expect the real culprit to be someone else than the obvious choice. In most cases, the twist is also Spoiled by the Format: if a detective show lasts for 45 minutes, and after the first 15 minutes the detective already appears to have caught the guilty party, it's almost certain the real culprit will turn out to be someone else.

Sometimes the writers like to play with audience expectations and subvert the trope as a Meta Twist by having the detective dismiss the most obvious suspect and go through others, only to discover later on that the person originally suspected was guilty after all. This is usually accompanied by some kind of unexpected reveal that explains how the obvious suspect was able to appear innocent. To use the example above, if the murder was commited by a right-handed person, and the detective rules out the obvious suspect because they are a leftie, it may later be discovered that they are ambidextrous, so they were the murderer after all.

Since this trope deals with plot twists and surprise revelations, the examples below may contain spoilers!