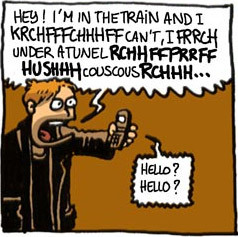 "*kshhhhh* You're breaking up, Sheldon. *kshhhhh* I'm going through a tunnel in an elevator. *kshhhh*"
— Marie, Splatoon 2
Advertisement:

The predictable but surprisingly effective method of ending a cellphone conversation in TV land — pretend there is interference on the line or that you are going through a tunnel, make some static noises and start saying "I can't hear you!" then hang up. Person avoided.

When trying this on a fixed-line phone, tradition requires you to press and release the switch in the phone cradle rapidly and repeatedly.

Sometimes subverted when the other person can blatantly tell what they are doing, or calls them back immediately.

Alternate variant is to have a character claim that they "lost the connection" or that "the battery is dying" while communicating via satellite, radio, or Subspace Ansible.

In older works dating from when long-distance phone lines were notoriously bad, fake static (created by crumpling a paper or blowing into the receiver) may be used to fake a long-distance phone call that's really being made from a nearby phone booth.

Contrast Cell Phones Are Useless, I Can't Hear You. See Impeded Communication for when the line really does go dead. If a person is making the static sound, it also counts as Saying Sound Effects Out Loud.