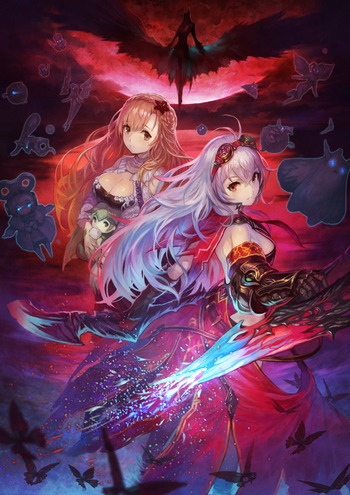 Run through this endless night and sing out the song of your life.
Nights of Azure (Yoru no Nai Kuni in Japanese) is a JRPG created by Gust Co. Ltd. for the PlayStation 3 and PlayStation Vita in Japan and later for PlayStation 4 in North America.
Advertisement:

800 years ago, a demon called the Nightlord threatened to cover the world in eternal night, putting everyone under a deep slumber. In response, an army of knights did battle with the Nightlord and his demons. The battle fought was fierce and many lives were lost but, eventually, the leader of the knights succeeded in defeating the Nightlord. However, as the final blow was struck, the Nightlord's Blue Blood rained down on the world, transforming humans into fiends but the knight managed to stop the Blue Blood and the Night at the cost of her own life. This knight would eventually come to be known as the "First Saint", the first in a long line of Saints that are tasked with strengthening the seal on the Night by an organization known only as the Curia.

Centuries later, the Curia dispatches one of their agents, the half-demon Arnice, to the small island of Ruswal due to rumors of the seal of the Nightlord being weakened. As soon as she arrives on the island, Arnice is reunited with her Only Friend, Lilysse. As they enter the island, they find out that the streets are crawling with fiends and that the rumors of the Night returning are true when they see that the moon that signals the Night, Milada, has appeared in the sky. In a race against time, Arnice and Lilysse must find a way to stop the Nightlord from returning. However, during their quest, new information begins to appear that sheds some light about the events that truly took place centuries ago.

Nights of Azure/Yoru No Nai Kuni contains examples of: