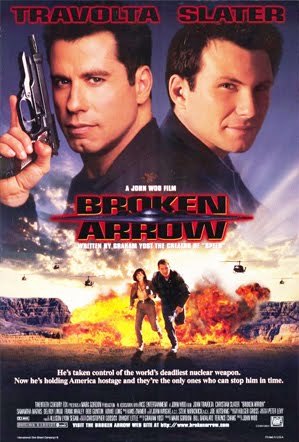 Riley Hale: You're out of your mind.
Vic Deakins: Yeah! Ain't it cool?
Advertisement:

Broken Arrow is about two stealth bomber pilots: Hale (Christian Slater) and Deakins (John Travolta) on a test flight while carrying a pair of live nuclear warheads. Deakins loses his marbles and attempts to hijack the nukes to ransom back to the U.S., but ends up crashing their plane in the middle of a national park. Undeterred, Deakins continues to carry through with the plan, leaving Hale to try and stop him with the help of Terry (Samantha Mathis), a sexy park ranger.

The term "Broken Arrow" is US military jargon for a nuclear weapons snafu, though the correct term for the plot is actually an "Empty Quiver" (stolen nukes) made to seem like a "Broken Arrow" (missing nukes).

This film was western cinema's second proper introduction to John Woo's Heroic Bloodshed genre of film, the popularity of which is cemented (by Rule of Three) one year later in 1997 by Face/Off, also by John Woo and starring John Travolta.