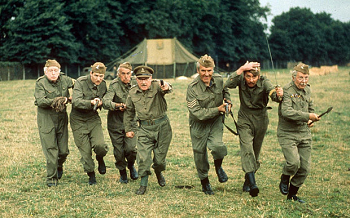 You have your army, perhaps it is a Badass Army, or just a Redshirt Army, but in any case, it is the standing army of your (nation-)state, with everything that entails. Of course, not everybody in the army does it for a living. Some folks just do it for the bit of extra pay, or the college benefits, or as a way to keep connected with the military after they retire and settle down to start a family.

These guys are the Home Guard. Typically, they will get called up when the nation goes to war, or in the event of a natural disaster or civil unrest. Many of them will be military veterans who got out of the regular army, or folks who had imminent life plans that precluded being away from home permanently. In more desperate situations, the Home Guard might include people who otherwise would not have been accepted into the military, but are being organized into a militia as a last ditch defense of their homes. Depending on a variety of circumstances, they might be equipped with obsolete weapons and equipment from decades past, or even less. In more ideal situations, they will use the same equipment as the regular troops, to better allow them to serve along side them in combat when needed.

Even the version of the trope where the Home Guard is little more than a Rag Tag Bunch Of Misfits armed with whatever they have on hand, it can be justified as freeing up more troops to fight the enemy before they can invade the home country.

In practice, these forces might also be called the Reserves or the Militia, with either name (in the United States, at least) carrying different connotations. From an American point of view, "Militia" sounds more like Training the Peaceful Villagers at best, and more like "Right-Wing Militia Fanatic" at worse. "Reserves" gives more of an impression of professional soldiers (again, from an American audience's perspective).

If they end up getting invaded and defeated, expect these guys to help form La Résistance.

Named for the British Home Guard troops who were formed to protect Great Britain in the event of German invasion during World War II.note Nazi Germany had their own version, the Volkssturm, discussed later in this article, though it was far more pathetic and was only formed in the last days of the war.

Most people would be surprised at how much action the Reserves actually see in Real Life, at least in the United States armed forces. In most armed conflicts, the active components are mostly only involved during the main fighting, while the post-war peacekeeping, policing and rebuilding operations, which are just as dangerous or even more so, usually go to the reserve components. In Operation Iraqi Freedom, for example, many United States National Guardsmen and Army Reserves served longer deployments than any of the active components did, and as such were exposed to dangers not seen by those who were involved in the main fighting (those videos you see of IEDs blowing up HMMWVs are most likely National Guardsmen or Reserves). Reserve components also tend to be more career-oriented: you see more Reserves staying until retirement age than active component soldiers.