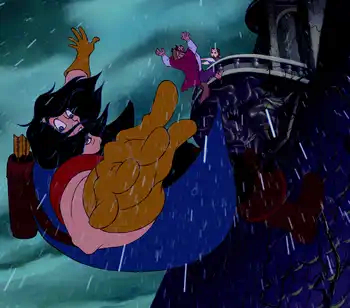 No one screams as they fall to their death like Gaston!
"You know what I love about heroes that don't kill? Bad guys always conveniently trip to their deaths around them."
— The Nostalgia Critic reviewing

Villains in the Disney Animated Canon have an especially curious tendency to exit the film by falling off or out of things. Unfortunately for them, even though they are animated characters, they cannot defy gravity.

The varied list of things to fall from includes cliffs, over waterfalls, out of trees, and off the tops of buildings. There is one case of a Disney villain meeting his end by falling up (off a spaceship and into space), and once sideways (off the Chinese Imperial Palace by the aid of a rocket). A surprising number of Disney villains have also been dragged to their doom by demons (up to three depending on how you're counting).

Sealing the villain's fate with a fall into nowhere serves three main purposes:

Note that none of these cases have to involve a Climbing Climax or a Rooftop Confrontation, though it may involve a One-Winged Angel transformation beforehand (which is by far the second-favorite trope of Disney villains).

Sometimes, a fatal wound will be inflicted upon the villain just before taking the plunge (whether caused by the hero or by the villain's own actions) just to ensure that he or she is definitely dead. Or, they could have a boulder or similar heavy object falling down with them, which will surely crush them when they land, or fall into a deadly environment like lava or molten metal, a pit of savage beasts, fire, Hell itself, or even flesh-eating green acid, as water alone won't always do it.

Keep in mind that you don't have to be a Disney villain to meet your end this way — many villains and other characters in action movies, cartoons, books, and other works have also met with this fate, although it's fair to say that most heroes have ways to survive taking the long fall.

Extremely apparent in Disney's "Bronze Age" (the string of late-80s-90s hits). Not to be confused with Disney Death. It seems only good guys get to have those (there is a villainous variant, but Disney doesn't use it often), though it can overlap in subversions of the trope.

There is also the non-villainous, non-conflict related variation of the trope, where a character decides to jump off a high ledge due to some stupid idea they have (e.g., thinking they'd fly), or through being Driven to Suicide.

May involve a Ring Out, Noose Catch, or Death Flight. Smokestack Drop is a Sub-Trope. See also High-Altitude Interrogation and Unhand Them, Villain!, as well as Death by Falling Over. When Recycled IN SPACE!, it's Thrown Out the Airlock. Video game examples can relate to Ring-Out Boss.

As this is a Death Trope, all spoilers will be unmarked ahead in the examples below. Beware!

Alternative Title(s): Falling To Their Death, Death By Falling