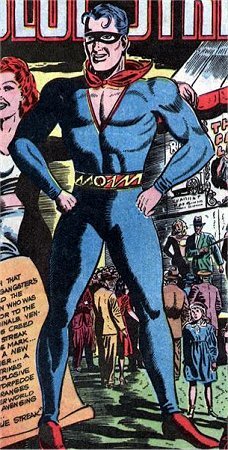 The Blue Streak is a Superhero from The Golden Age of Comic Books, published by Prize in Headline Comics #13-15.

Jim Dare is part of an acrobatics troupe with his brother and sister. His brother one day tries to thwart a robbery, and is killed. Swearing vengeance, Jim uses his acrobatic abilities to become the heroic Blue Streak!

Not to be confused with the film or the Captain America villain.