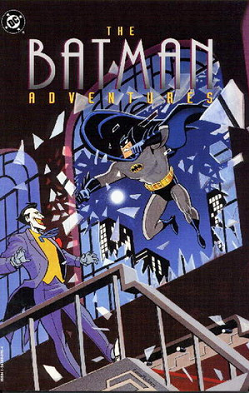 The Batman Adventures was the official Batman tie-in comic of Batman: The Animated Series. It started in October 1992 and was re-launched several times to match the various retoolings of the TV series, becoming successively The Batman and Robin Adventures, Batman: Gotham Adventures, and finally Batman Adventures (with no "The"). This last version was cancelled in 2004 as part of the general deck-clearing as the DCAU drew to a close.

In 2020, DC launched a digital-first comic, Batman: The Adventures Continue, set in the DCAU, with writing handled by Alan Burnett and Paul Dini, and art by Ty Templeton.

There were also a number of special issues, such as an adaptation of SubZero; the Eisner Award-winning Mad Love, which detailed Harley Quinn's origin for the first time; and the miniseries The Lost Years, which depicts the three-year Time Skip between The Adventures of Batman & Robin and The New Batman Adventures. Mad Love was later adapted as an episode of The New Batman Adventures, as was another anthology issue that became "Holiday Knights".