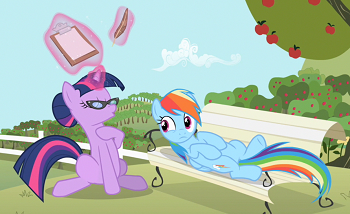 So, tell me about your dream...
"You know, you don't actually have to lay on the couch like it's a Woody Allen movie."
— Pro. Ian Duncan, Community
Advertisement:

A famous Stock Pose originating in Freudian tradition of psychiatry. As short hand for therapy, someone lies on their back on a couch and stares at the ceiling while avoiding eye-contact with their therapist. This is not very common nowadays, as not even the classical psychoanalysts were unanimous in its usage, but some therapists (even non-Freudian ones) still have one in their room, at least as an option. It is sometimes due to a certain measure of The Coconut Effect: as people often fully believe All Psychology Is Freudian, some patients relax more and open up with their problems in a position they expect due to its omnipresence in pop culture.

In real life, Sigmund Freud trained in psychiatry under Doctors Jean-Martin Charcot and Josef Breuer, both of whom used hypnosis as treatment. In hypnotherapy, the couch was a necessary piece of equipment used to make the patient relax and drift off into a hypnotized semi-sleep. Although Freud later moved away from using hypnosis, he kept the couch as he found the relaxed state helpful in allowing the patient to form free associations.

Fans of Freudian psychoanalysis note that during free association the therapist and client are not facing each other, but this has become a visual symbol of therapy anyway.

Used often as a joke in cartoons and comics, but it appears in all media.

Example of:
Get a Hold of Yourself, Man!