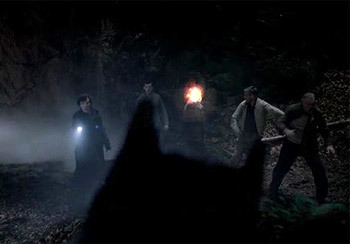 "It's odd, isn't it? Strange choice of words. Archaic. It's why I took the case. 'Mr. Holmes, they were the footprints of a gigantic hound.' Why say 'hound'?"
— Sherlock Holmes
Advertisement:

A bored Sherlock decides to take on the case of Henry Knight, who claims to have seen the footprint of a gigantic hound in the woods. He also claims that 20 years before he had seen his father mauled to death by the creature. Holmes assumes that the source of the creature is the nearby Baskerville military research facility. Using his brother Mycroft's identity card, he and Watson gain access to the facility though his ruse is quickly found out. His faith in his abilities is shaken to the core when he too sees the creature, something that genuinely frightens him.

The 21st century take on possibly the most famous work in the Holmes canon — The Hound of the Baskervilles.