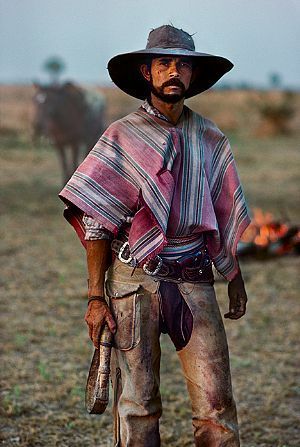 "¡Qué lo parió!"
The Gaucho is the archetypical character in the gauchesque poetry and fiction, a quintessential inhabitant of The Pampas, and a common stereotype of the Argentinian and Uruguayan peasant even today. In the simplest terms, a gaucho is merely a native inhabitant of the South Cone countryside, a common worker of the fields, maybe even a rural soldier or policeman. In the early days of the revolution, they became an archetype of the Argentinian character.
Advertisement:

The Gauchos are a national symbol in both Argentina and Uruguay. They became greatly renowned in legends, folklore and in literature and became a central point of their regional cultural tradition. They are traditionally depicted as brave, a bit lazy, free and violent folk that inhabited the pampas, with many similarities with the Cowboy, but very different at the same time.

The Gauchos historically are very diverse, as they came from diferent regions and provinces of the Spanish colonies in South America. They are similar to the Chilean huasos, the Cuban guajiros and the Venezuelan llaneros, as they descend of Spanish commoners that went to the countryside and mixed with the indigenous people (even the women of the gauchos are called chinas for the almond-shaped eyes), forming the main native population of many lands. They were primarily cattle herders, hunters and soldiers, minor owners of the fields surrounding the small towns in the Southern Cone, specifically the Center and North of Argentina, the South of Brazil (Gaúcho is also the common denomination of the current inhabitants of the Brazilian State of Rio Grande do Sul), Southern Paraguay and the entire Uruguay. They were superb horseriders and cattle herders, as their main possession is a horse.

In the Independence Wars, and later in the Civil Wars, the most basic unit in the armies were cavalry composed entirely by gauchos, using the "montonera" tactic: a sort of horseback guerrilla, they swarm over an enemy army, strike and retreat faster than lightning. This tactic was a major drawback for the "civilized" Spanish armies, that were unable to fight them. The typical "montoneros" were armed with lances or spears for charges, boleadoras (bolas) for ranged or melee attacks, and faconesnote Long sheated knifes carried by a gaucho in his sash. for close-quarter fights.

The gauchos usually wore "ponchos", -long, thick blankets which doubled as a saddle blanket and as sleeping bag,- loose-fitting trousers called bombachas belted with "tiradores", and a chiripá, a type of loincloth. In the head, they often used a vincha (a type of bandana) or a medium-sized hat. The common gear was very similar to the military equipment of the montoneros, but lacking the spear. The bolas and the facón were very important as tools and weapons for the gaucho, as guns weren't very common yet. The bolas were the main hunter's Weapon of Choice, as they can trap easily the legs of the prey, or knock them down by the mere impact of the hit, and the facón was the primordial weapon and tool for everything else.

After the Civil Wars, they became a problem for the modernization idealists, as they were the backbone of the provincial and rebel armies of the caudillos. People like Sarmiento had a love-hate relationship with them, as they admired them by their horse prowess and bravery, and hated them due to their "barbaric" looks and behavior. For the common folk of the 1880s, the Gauchos were ignorant, illiterate, murderous, lazy scumbags, an anathema for their "civilized" and European views.note Later, when the gauchos were no more, the same good ol' oligarchy praised them as the national symbol against the ignorant, illiterate, murderous, and lazy European immigrants, that even dare to speak their own languages instead of Spanish! Not to mention communism. Obviously, the problem on what to do with the Gauchos had a solution. The Argentinian government sent them to the frontier as soldiers in the wars against the indigenous people, while the Brazilian and Uruguayan governments sent them against Paraguay. Then, the Gauchos were replaced in the countryside by a large number of immigrants brought mainly from Italy, Spain and Germany.

They are usually depicted as long-haired, bearded badasses with tanned skin who raid the Pampas prosecuted by the law, or sitting in a pulpería (a sort of bar and general store) or a fogón (bonfire) drinking mate and playing the guitar. They may be represented both as noble, proud, tragic and free warrior poets; or as hideous, treacherous and murderous "malevos", as opposed to to fair, gentle and well-mannered "European" heroes.

This trope appears mainly in the South American literature, and depictions of the Southern Cone culture. Contrast Latin Land and Mayincatec, for stereotypical views of Latin America.