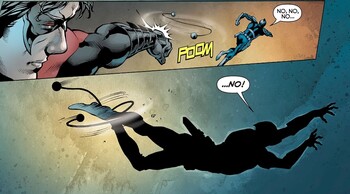 A bolas is a type of throwing weapon made of weights on the ends of interconnected cords, used to capture animals by entangling their legs. This is the traditional tool of the Gaucho, although versions of it have existed since pre-Columbian times.

In Real Life, the bolas is a tool of hunters and herdsmen, with only occasional use in actual warfare. However, in fiction, probably because it looks so spectacular in action, the bolas is often used as a combat weapon to take down foes, especially in visual media.

Usually found as the Weapon of Choice in warriors and fighters who personify You Will Not Evade Me, as a counter-escape tool.

One advantage of the bolas is that allows for the capture of people without doing permanent harm to them, making it the perfect weapon for someone looking to Bring It Back Alive.

Often extends into Rock Beats Laser territory when the bolas, which is stone age technology, is capable of taking down someone armed with a fully automatic firearm or even an Energy Weapon.

Sister Trope to Battle Boomerang. See also Knows the Ropes for use of the lasso, the Western equivalent of the bolas.