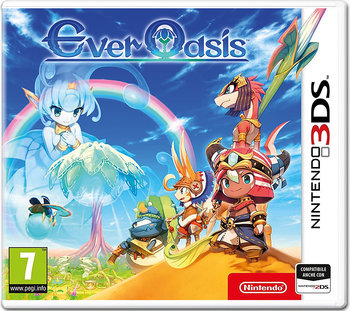 "I believe it's very important that we ourselves move forward while carefully considering, "What can I do?" or, "What should I do?" for those "precious things".
— Koichi Ishii
Advertisement:

Ever Oasis is an Action RPG developed by Grezzo after their work on The Legend of Zelda franchise, helmed by Koichi Ishii of Final Fantasy and World of Mana fame. Published by Nintendo and available exclusively on the Nintendo 3DS, it was released on June 23, 2017.

The story concerns the diminutive Plant People called Seedlings, who formed pacts with water spirits to grow oases and live in the unforgiving desert. All is not well however, as they were soon set upon by the evil Chaos, who turned creatures and people it corrupts evil.

At the start of the game, the player is hurled out of their brother's oasis and left to make one themselves. Aiding them in their quest is Esna the water spirit, who may be the last of her kind. Together they must form a flourishing oasis from nothing, invite residents in, and maybe even stop Chaos at its source.