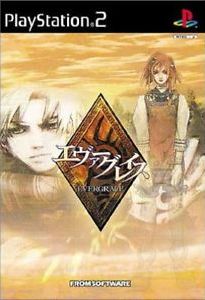 Evergrace is a 2000 Action RPG for the PlayStation 2, created by FromSoftware and published by Agetec in North America and Ubisoft/Crave Entertainment in the PAL Region.
Advertisement:

It follows Darius and Sharline, two Player Characters having separate storylines. They both possess a mark on their hands, called a Crest, which is considered cursed and brings their bearers (and everyone who encounters them) misfortune. And it might be true. One day, these bearers somehow find themselves whisked away from their home continent of Edinbury and into the magical world of the Rieubane Empire, a kingdom considered a fairy tale in their home world.

The game traditionally plays like an Action RPG, and places a heavy focus on managing your stamina meter, here called your Power Meter. There's tons of loot, lots of unique weapons, and a wide assortment of odd bits of equipment to help you on your way. The game is perhaps best known for its experimental soundtrack; the closest approximation is cacaphonic-electronic-country-folk music with wildly shifting tempo and a focus on woodwind and string instruments, as well as a heavy focus on odd throat-singing. It helps carry the games' strange tone quite well, and sells that the world of Rieubane is an odd one to say the least.

This game has Prequel titled in a Non-Linear Numbered Sequel style, Evergrace II, also known as Forever Kingdom outside of Japan.