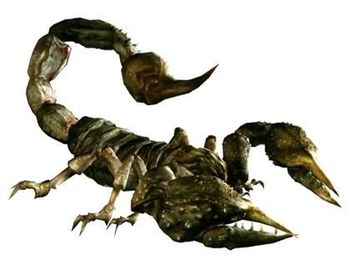 I'm Stingy the Scorpion, and I'm gonna KILL YA! So, Get Over Here!
Advertisement:

In Real Life, scorpions are mostly shy, retiring arachnids, preferring to stay out of trouble and only using their pincers and stinging tails to subdue prey (or potential mates) or defend themselves.

In fictionland, scorpions often make appearances as deadly foes. This is probably a combination of Rule of Cool and their distinctively badass appearance, but it does tend to get them a fair bit of demonization due to Animal Stereotypes. Scorpions, being of the arachnid class, are closely related to spiders, and as with spiders and their fangs, scorpions are pretty much universally known for their tails, and are, admittedly, pretty scary things to come across, large or small.

In popular culture, scorpions are often depicted as scary even by arachnid standards. While there are a number of examples of heroic or at least benign spiders in fiction, scorpions are almost invariably portrayed as evil to the point of being made out as an Unpleasant Animal Counterpart to spiders. For a given value of evil that is, as they rarely have developed enough personalities to amount to anything more than dangerous, mindless animals and often no more than tools of murder for wannabe killers: because of their venom, they are used as Animal Assassins, although where Spiders might be associated with the thief or rogue in a Fantasy setting, Scorpions tend to be associated with hunters or warriors due to their heavy armor. You can often expect scorpions in Shifting Sand Land, possibly alongside Scorpion People. Spider Tanks may have the appearance of a scorpion. May be stabbed.

However, the majority of scorpion stings are not dangerous to humans, being on average only about as dangerous as a bee sting. The Emperor Scorpion, probably the largest and most iconic scorpion species, is frequently seen, despite being one of the least venomous species and are even popular as pets or even as food (popular as far as arachnid fans go, anyway).

Compare Spiders Are Scary and Creepy Camel Spider, for other arachnids that tend to be portrayed as much more dangerous and aggressive than they are in real life.

After escaping the Decepticons' attack on their military base, the survivors find themselves pursued through the desert by a Cybertronian scorpion bent on finishing the job.

After escaping the Decepticons' attack on their military base, the survivors find themselves pursued through the desert by a Cybertronian scorpion bent on finishing the job.