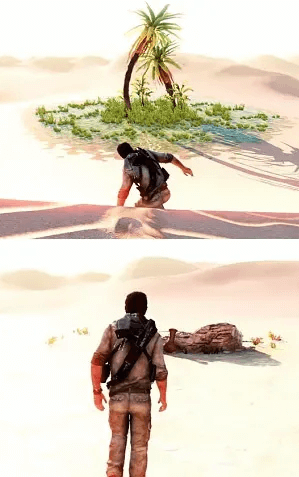 Real mirages do not require groundskeepers.
"What a spot to pick for a mirage-ee!"
— Bugs Bunny, Sahara Hare
Advertisement:

The characters are stumbling through a desert, for whatever reason. They're unprepared, dehydrated and starving, desperate, depressed, generally in a sorry way.

But hark! One of the characters sees an oasis. Glittering blue water, cool palm trees, a small carpet of grass growing around it, and in some cases, beckoning Bedlah Babes. They sprint to it and fill their mouths with handfuls of refreshing water... and then the scene fades, leaving the characters to spit out their mouthfuls of gritty sand. Some examples forgo the oasis altogether, resulting in a phenomenon similar to Meat-O-Vision where characters hallucinate bars, ice cream stands and water fountains that vanish into thin air when the desperate travelers sprint towards them.

A Real Life mirage is simply an optical illusion wherein it appears that the sky becomes refracted on a hot, flat surface, creating a blue area that looks like water a distance ahead of you; this can happen in several climates (including temperate ones where one sometimes sees puddles of water on a warm blacktop road), but seeing water in the desert has a greater appeal. Only a water-like blue patch appears in a real mirage, however. The palm trees, grass and refreshments that disappear with the water are largely a result of comedic exaggeration. However, the term "mirage" is also used for when someone has a hallucination, leading to this confusion.