Recap / Tintin: The Crab with the Golden Claws 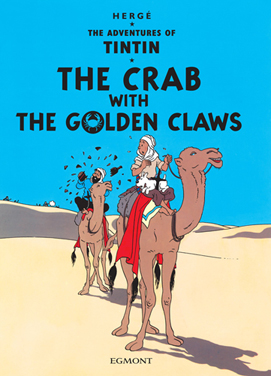 One day when visiting Thomson and Thompson at their office, Tintin takes note of a scrap of paper ripped from a can of crab meat among the belongings of a recently drowned sailor. Upon examining the scrap of paper, he sees the name "Karaboudjan" written on it and is then informed that this is the name of the ship where the sailor was employed.
Advertisement:

After an unknown Japanese man is kidnapped on his doorstep, Tintin decides to investigate the Karaboudjan, but is immediately captured. While being held captive, Tintin discovers that the ship's cargo of canned crab meat is actually a cargo of opium. Tintin confronts the ship's captain, named Haddock, but discovers that he doesn't know about the smuggling operation, and is being deceived (and supplied with a lot of whiskey) by his first mate Allan. Along with Haddock, Tintin escapes and ends up in Morocco, where they continue their investigation of the smuggling operation.

The Crab with the Golden Claws is the debut of Breakout Character Captain Haddock, who was originally intended as a one-shot character, but ended up appearing as Tintin's ally in every single story after this one, eventually eclipsing Tintin himself in popularity, even in the eyes of Hergé himself.

This is the first story that Hergé produced during the German occupation of Belgium (1940-1944) for the Brussels daily newspaper Le Soir ("The Evening"). During the occupation this leading French-language paper of Belgium had been handed over by the Germans to Belgian collaborators and thus was called Le Soir volé ("the stolen Soir") by those who weren't collaborators. At first the installments appeared in a weekly supplement for children, but the war paper-shortage meant that this kept getting smaller and smaller and by September 1941 it was discontinued entirely. From then on Tintin appeared as a small daily comic strip in the main pages of Le Soir. The Crab with the Golden Claws was collected into a color album. In the 1960s this version was reworked at the behest of the American publishers.

This book also has had the most adaptations, in addition to the Belvision and Nelvana adaptation, it has also been adapted into a stop motion animated film in 1947

and it also served 50% of the elements of the 2011 movie adaptation.