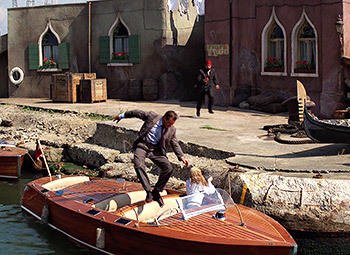 The bad guys are on your tail! There's nowhere to hide, nowhere to go... but if you're anywhere near a body of water, don't worry: Guaranteed, there's a boat about to leave the dock. Just run a bit faster, hit the edge of the wharf, and jump onto that bad boy! You'll be safe at last, and if you're lucky, your pursuers will try and follow— and end up swimming back to shore, shaking their fists all the while.

This also counts if you drive off a bridge and a barge shows up below. Very rarely is the subject of how the escapee gets off the boat addressed— they might end up swimming back to shore, too. Sometimes justified by having the pursuers cuss about how their quarry not only got away, but stole their boat as well. Another frequent example is a rowboat or motorboat being left unattended with the oars left or sufficient fuel near lakes and rivers. Can also extend to pre-made rafts.

In the case of rowboats or motorboats, it's common for the boat to either be busted up and sink immediately or missing or oars or fuel. Closely related to its action-movie brethren Roofhopping, Hero Stole My Bike, Trash Landing, and Train Escape. Car examples may include a Ramp Jump.