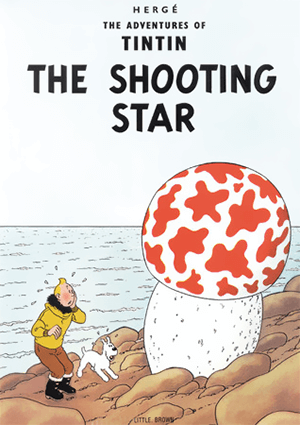 One night when on a walk with Snowy, Tintin notices a new star has appeared in the Great Bear. When he notices that the star appears to be growing larger, he questions the astronomer Professor Decimus Phostle about it. Tintin discovers to his dismay that the star is, in fact, a meteor that is due to collide with the Earth and cause The End of the World as We Know It.

Fortunately, Phostle's assistant's calculations are proven wrong when the meteor ends up missing the Earth. However, a small piece of the meteor still crashes onto the planet and lands in the Arctic ocean, causing a short earthquake. When it is discovered that the meteor is made up of a hitherto unknown substance, the story becomes a race with Tintin, Phostle, Captain Haddock and a team of scientists on one side and the Peary, a crew hired by the villainous Mr. Bohlwinkel on the other side. Whoever's the first to reach the meteor's location and claim the mysterious material will be making the discovery of a lifetime.

Written during a period in which Belgium was occupied by Nazi Germany, the book is an oddball among the canon of Tintin stories, particularly given the fantastical elements. Controversy over Herge's depictions of Americans and Jews have dogged the work. A revamped version made some changes, particularly in terms of the antagonists' nationality.