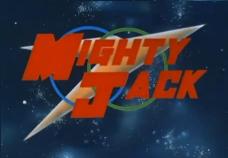 Mighty Jack (later retitled Fight! Mighty Jack) is a 26-episode action-adventure Tokusatsu series created by Eiji Tsuburaya (creator of Ultraman) from his own studio, Tsuburaya Productions, that ran throughout 1968 on Fuji Television. A great deal of the crew from Tsuburaya's Ultra Series worked on this show, notably Ultraman designer Tohru "Tohl" Narita, who designed the Mighty Jack sub.

The series centers around a team of secret agents serving a top-secret international peacekeeping organization known as Mighty Jack. They are:

These brave agents face the nefarious exploits of the subversive terrorist/saboteur organization known only as "Q". And to do so, each agent brings their own unique skillset to the table. But more significantly, the whole team possesses a highly advanced flying submarine also called Mighty Jack. This 800-foot behemoth is a virtual flying fortress, carrying all manner of weapons and vehicles while taking its team of superspies to every corner of the world in the global struggle against Q's endless plots.

A sort of hybrid of James Bond and Voyage to the Bottom of the Sea, with cues taken from Thunderbirds and Toho's Atragon, Eiji Tsuburaya considered Mighty Jack his Magnum Opus. While the series proved to be popular in its own right, Executive Meddling was not happy enough with the series' dark tone, and Mighty Jack was given a major retool as the more kid-friendly Fight! Mighty Jack in its second season. The result was a more comical tone that replaced the espionage with rampaging Monsters of the Week, not unlike Ultraman, as well as episode lengths being cut from one hour to just half an hour and almost all of the cast being replaced.

The first season's first and sixth episodes were strung together by Sandy Frank Entertainment and dubbed in order to create a feature-length movie released in 1986. The result (or perhaps more accurately, butchering) was featured on Mystery Science Theater 3000's KTMA season and later on its first Comedy Central season. For that version, please go to the MST3K episode recap page.

But regardless of what Joel and the Bots thought of Sandy Frank's film or what the executives did to the show in its second season, Mighty Jack is considered a classic in its home country, with model kits of the series' various vehicles still being readily available for collectors and hobbyists. In fact, the title sub's emblem is that of Tsuburaya Productions!