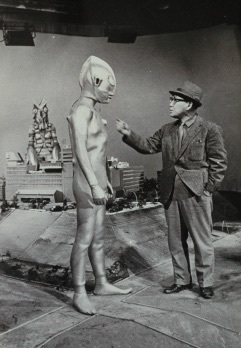 The Master of Monsters with one of his greatest creations.
"My heart and mind are as they were when I was a child. Then I loved to play with toys and to read stories of magic. I still do. My wish is only to make life happier and more beautiful for those who will go and see my films of fantasy. "
— Eiji Tsuburaya in a 1965 interview with Caper Magazine
Advertisement:

Eiji Tsuburaya (円谷 英二) was an influential special effects director considered by many to be the "God of Tokusatsu". Born July 7, 1901 (as Eiichi Tsumuraya) and died January 11, 1970, Tsuburaya is famed in Japan for having effectively created the nation's special effects industry, as well as his involvement in the creation of two of its most iconic pop culture characters — Godzilla and Ultraman.

During his childhood, Tsuburaya was fascinated with aviation, which was a hobby he'd have all his life. In 1919, he took up his first job as a cameraman for Nikkatsu. In 1938 he became special effects director at Toho Studios. During World War II, he worked on several propaganda films, one of which, The War At Sea From Hawaii To Malay, featured a recreation of the Pearl Harbor bombings so well done the American censors during the post-war occupation became frightened and thought it was real footage of Pearl Harbor. This actually got him accused of involvement in espionage, resulting in a brief exile from Toho.

After the war, he formed his own independent effects company until returning to Toho in 1951. In 1954 he was one of the team who made Godzilla (1954), and he was head of the special effects team for all the Godzilla movies up through All Monsters Attack, as well as many other fantasy, science-fiction, and war films of the period. However, due to work on at his own studio mentioned below, he only supervised visual effects for Ebirah, Horror of the Deep, Son of Godzilla, and Destroy All Monsters, and received credit in All Monsters Attack out of respect for him despite no involvement due to serious illness.

In 1963, Eiji Tsuburaya established his own studio called Tsuburaya Productions to do special effects work for other companies, but in 1966, he and his crew became better known as the creator of another classic tokusatsu series, Ultraman. Alongside the equally acclaimed Ultra Q and Ultraseven, Ultraman would spawn the Ultra Series whose heroes would become as popular in Japan as Godzilla himself and the most beloved of his studio's works.

Raised a Buddhist, he became a Catholic after marriage as his wife was one, which influenced some of the imagery he used in his works (as seen in Mothra and Ultraseven).

During his 50-year career, he worked on approximately 250 films in total. Let's just cut down on films he's worked on that you'll recognize.

Films and series he's worked on:

Tropes applying to Eiji Tsuburaya and his work