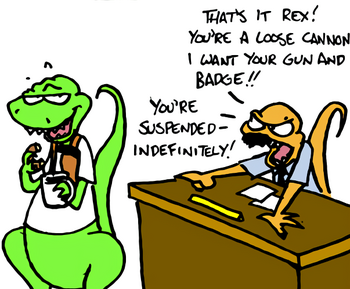 T. Rex! You can't stomp that house! You don't have a warrant!

"I'm sick and tired of making excuses for you two! You're an embarrassment to the department! You're off the case and off the force. Your badges, your windbreakers, now."
— Abed Nadir, Community
Advertisement:

This is the eternally put-upon superior of an organization police department. They are always strict and by-the-book but can be comfortably relied upon to give a good Arson, Murder, and Lifesaving-style speech. You can always expect them to say that you have twenty-four hours, have you Taken Off the Case or demand that you Turn in Your Badge, usually at the top of his formidable voice. They frequently worry that the mayor or district attorney will have his ass (and pension) for whatever destruction the Cowboy Cop caused. They will occasionally prove to have a heart by giving his men an inspirational speech. They are the police department equivalent of A Father to His Men. Of course in the By-the-Book Cop's case, Da Chief would do the exact opposite.

He is rather flexible in terms of laying down the law and views the By-the-Book Cop's attempts to find a solution with minimal violence as counterproductive and expects zero negotiations with criminals or terrorists while gladly accepting the Cowboy Cop's methods if it means nabbing the most notorious. However, he will be quite proud of the cop if he meets up to the expectation stating how he found someone's idealism of justice pulling through and knows when to reel in the Cowboy Cop when they go too far.

Depending on his milieu and personal tastes, he may be sporting a mustache, wearing suspenders (belt braces), a pistol in a shoulder holster, or a cigar firmly planted in a corner of his mouth. Frequently (though by no means always) Da Chief is a Reasonable Authority Figure, but just as frequently they are a Mean Boss. Sometimes a Private Detective will have him as a Friend on the Force. If they are not friends of the main characters/group, then they are usually The Neidermeyer and exist only to have their authority stepped over while they bluster. Originally, the Da Chief was Always Male but has since seen more variety such as a woman, ethnic minority, or some combination thereof.

Compare Da Editor, who has a similar plot function and personality (and many times appearance), but is the boss of the Intrepid Reporter. Frequently overlaps with Mean Boss and Beleaguered Boss.

[Luger is yelling about wanting the case]
Captain Doyle: Wait a minute! I'm the captain here! I do all the yelling! But if it's that important to you, take the damn case!