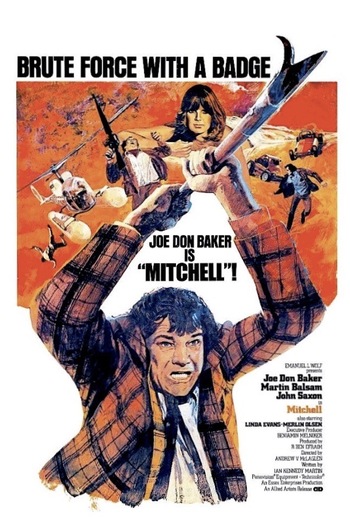 The Chubby Blue Line is about to stab you!
"My, my, my, my, Mitchell. What would your momma say?
If she ever knew that you were crawlin' out and carryin' on that way...
Crackin' their heads, and jumpin' in and out of beds and hangin' 'round the criminal scene.
Do you think you are some kind of a star, like the guys on the movie screen?"
—Hoyt Axton's Thematic Theme Tune.
Advertisement:

The film opens with the shooting of an unarmed home invader by Walter Deaney (John Saxon). Though Deaney claims self-defense, Mitchell is doubtful but can't properly pursue the charge due to the FBI wanting Deaney for far worse. The police chief tries to keep Mitchell busy by getting him to stake out a man named Cummings (Martin Balsam) who's involved in trafficking stolen merchandise and later drugs. Deaney also sends Mitchell a hooker named Greta (Linda Evans) to try and butter him up. After a disturbing sex scene involving beer and baby oil, he arrests her for having pot. Eventually Deaney tries to kill Mitchell, but dies in the attempt. Cummings is meanwhile trying to stop some Italian mobsters from bringing a shipment of heroin through his port. After a rather long scene of Mitchell yelling at a child, Cummings manipulates Mitchell into believing he'll help him catch the mobsters but in reality Cummings just plans to steal the real heroin and set up Mitchell. Mitchell gets wise and kills the Italian gangsters, then chases Cummings's boat. After a brief fight on the boat, he kills Cummings's "lousy" butler (Merlin Olsen) and finally Cummings himself. He returns home to find Greta waiting for him and he goes ahead and arrests her again for good measure (as she's been revealed to be high on pot, the viewer suddenly understands why she was willing to sleep with Mitchell).

Initially released by Allied Artists, the film was later recut for television by Lorimar to remove all of the nudity, profanity, and violence, with some scenes obviously having been shot twice during production to remove swearing. It was the Lorimar cut that appeared on Mystery Science Theater 3000 in 1993, now further recut for the length of the program and actually losing the resolution to the Deaney subplot in the process. The episode went on to be extremely popular largely for its jokes focusing on the unpleasantness of the Mitchell character. It also featured the departure of original host Joel Hodgson, thus guaranteeing its visibility among other episodes of the show. Not surprisingly, it is this version of Mitchell that most people are familiar with.