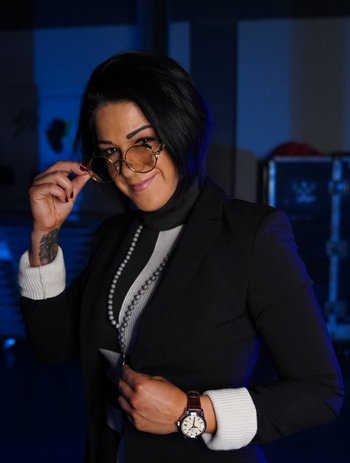 Having attended Big Time Wrestling's events since she was eleven, she eventually decided to make the transition from fan to worker, then from worker to wrestler, debuting in 2008 as Davina Rose after training from Jason Styles. Under this character, she wrestled in NWA Pro, Vendetta Pro Wrestling, the Empire Wrestling Federation, SHIMMER, SHINE and Canada's ECCW.

She then signed with WWE, who naturally repacked her as Bayley to perform in its developmental branch, NXT. Under her current ring name, she is one fourth of the company's "Four Horsewomen" (alongside Charlotte Flair, Sasha Banks and Becky Lynch), a cohort of four women who came through NXT and were a major part of the revolution of women's wrestling in WWE through their stellar matches. She is a one-time NXT Women's champion (before dropping the belt to Asuka); eventually losing her rematch for the title, on the August 22nd, 2016 episode of RAW, she finally made her main roster debut in a victorious effort against Dana Brooke.

On February 13, 2017, she won her first WWE RAW Women's Championship, defeating Charlotte Flair in the RAW main event, and at Elimination Chamber 2019 she became one of the inaugural Women's Tag Team Champions together with Sasha Banks. At Money in the Bank 2019, she won the women's ladder match, subsequently cashing in to face Charlotte for the Smackdown Women's Championship, which she won, making her the only woman who has won the Raw, Smackdown, NXT and Women's Tag Team Championships and thus making her the first woman Triple Crown and Grand Slam Champion for WWE.

As of October 2020, Bayley holds the record in WWE for longest combined number of days as Women's Champion, 953 days as of this writing. note Yes, it's true that The Fabulous Moolah will always truly hold the top spot with her over ten-thousand-day reign, but Moolah had three decades and very little true competition in which to amass her reigns, and most of these days were inflated by the promotion thanks to politicking on Moolah's part, so most will agree Bayley's earned it over her.