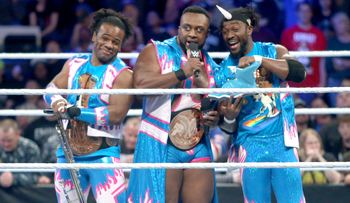 Left to right: Xavier Woods, Big E, Kofi Kingston. Next to Xavier, Francesca, the trombone.
"You cannot move ahead by shaking hands, kissing babies, singing and dancing like a puppet. You cannot move ahead by always doing what you're told. Now, this is our time. This is our place. It is time for us to find focus. It is up to us to find order. Together it is our time to find purpose because we do not ask any longer. Now, we take."
— Xavier Woods, WWE Monday Night RAW #1104
Advertisement:

AWWWWWW, TVTROOOOOOPES! DON'T YOU DARE BE SOUR! CLAP FOR THE PAGE OF YOUR WORLD-FAMOUS ELEVEN-TIME CHAMPS... AND FEEEEEEEEL... THE POOOOOWER!

The New Day is a WWE 3-man stable consisting of Big E Langston, Kofi Kingston, and Xavier Woods. Debuting in November 2014, their gimmick is reminiscent of Southern Baptist preachers and the power of positivity, complete with a backup gospel choir and a lot of Clap Your Hands If You Believe. For the first few months they were not exactly well received with most finding the gimmick to be too corny, racist and not fitting in well with the general tone of WWE...

However, an extremely subtle Face–Heel Turn combined with a doubling down of their hamminess and a run at the tag-team titles made them one of the biggest hits in the company. By keeping up basically the same shtick but as villains, they immediately went from awkward and corny to absolutely glorious trolls who are masters of insulting everyone in the WWE Universe with smug smiles on their faces.

This made them so popular that the trio became the de facto Faces of the company's roster, completing another subtle turn simply by phasing out heel tactics in early 2016. Between the Raw and Smackdown titles, they are the ten-time, and longest-reigning... "W. W. E. World. Tag. Team. CHAMPIONS!"

And during their run together, Kofi defeated Daniel Bryan at Wrestlemania 35 to finally become the... "W. W. E. World. Heavy. Weight. CHAMPION!"

After a six-year uninterrupted run together, The New Day were broken up in the 2020 Draft when Kingston and Woods were drafted to RAW while Big E was separately drafted to remain on SmackDown, with the team having one last 3v3 tag match on the next SmackDown against The Bar and Shinsuke Nakamura as a farewell celebration. A year later however, they are reunited when Big E cashed in his Money in the Bank Contract on Bobby Lashley to become the second member of the team to win the WWE Championship.

"These tropes are BOOTY!":