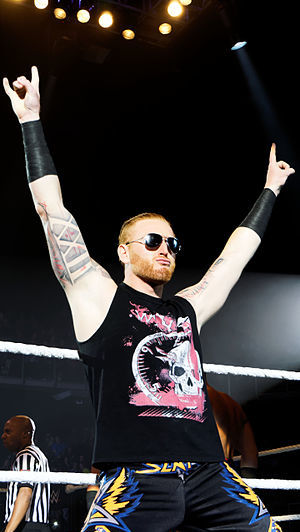 Heath Wallace Miller (born July 13, 1983) is an American professional wrestler from Pineville, West Virginia, best known for his time in WWE as Heath Slater. He debuted in 2004 in the Georgia wrestling scene. In 2006, he signed a developmental deal with WWE and was assigned to their short-lived Deep South Wrestling promotion. When DSW was abandoned in 2007, Miller was sent down to Florida Championship Wrestling. In 2010, he was introduced to WWE audiences as Heath Slater as part of the first class of "rookies" on WWE NXT, which, of course, led to the debut of The Nexus. After that group broke up, he spent time in Wade Barrett's group the Corre. He was the leader of 3MB until the group was disbanded by the release of his stablemates Jinder Mahal and Drew McIntyre. He was, for a time, part of a Tag Team with Titus O'Neil called Slater Gator. Following that, he formed a four-man stable with Bo Dallas, Curtis Axel and Adam Rose called the Social Outcasts, only to be the sole member of the active roster to not be drafted to either show. This began a "free agent" storyline that saw him make appearances on both brands until he earned himself a SmackDown contract at Backlash. He was released from WWE in 2020, and has briefly surfaced in Impact Wrestling.

Among his in-ring achievements, he is a former FCW Southern Heavyweight Champion

with Justin Gabriel and the first ever WWE Smackdown Tag Team Champion along with Rhyno.

He's got tropes, he needs this job: