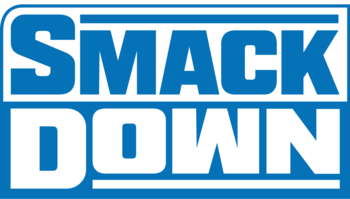 "Are you ready for a good time?"
Advertisement:

WWE SmackDown (also known as Friday Night SmackDown or simply SmackDown) is a Professional Wrestling series produced by WWE that, as of 2021, airs live every Friday at 8:00 PM ET on Fox, with Fox Deportes simulcasting the program with Spanish-language commentary. One of the promotion's two flagship wrestling programs alongside WWE Raw, the name was derived from a Catchphrase of The Rock, who always looked forward to "laying the smack down" on the "roody-poo candy ass(es)" of his opponent(s). As such, The Rock often referred to SmackDown as "The Rock's show."

Initially airing on UPN on Thursday nights back in 1999, SmackDown was often considered the B Show, lacking quite a bit of the controversial mayhem of Raw. This was largely due to the fact that unlike Raw, which aired on cable television's USA Network, SmackDown aired on network television, which has stricter standards than cable in regards to objectionable content. Raw, starting in late 1999, was also aired live on Monday nights, while SmackDown was taped the next day.

Like Raw did with WCW Monday Nitro, SmackDown had a competitor in the form of WCW's Thursday night show Thunder. This competition was severely downplayed in comparison to the Monday Night Wars, however, and only lasted for six months (Thunder got moved to Wednesday nights on January 12, 2000 solely because SmackDown was creaming it in the ratings). WCW itself went out of business on March 26, 2001.

In 2002, following the company's acquisition of WCW and ECW, the rather bloated WWE roster was split into two brands: the Raw brand and the SmackDown brand. While Raw had well-known veterans comprising a good chunk of the roster, SmackDown became unique in its placement of new, up-and-coming talent in the spotlight, shaping the future of the company (as well as hosting the first incarnation of WWE's Cruiserweight division); eventually, WWE's third brand (the "revival" of ECW) began to function in this manner by introducing new talent, while SmackDown showcased both relatively new talent and veterans alike. Thanks to the brand extension arguably working in its favor, SmackDown is rarely considered a B Show now; in fact, several members of the IWC consider it either at the same level as — or better than — Raw (which would end up happening again after the roster was once more split in 2016).

Soon after the brand extension, SmackDown was moved to Friday nights. Many were concerned about the show being ruined by the Friday Night Death Slot, but in a total aversion of that trope, it scored higher ratings for UPN than the network ever did with its Friday night movies or even what was in the slot prior to SmackDown, Star Trek: Enterprise (which ended its run the season before). Prior to the actual move, WWE took the move in stride by using the slogan "TV that's changing Friday nights" and re-christening the series WWE Friday Night SmackDown; the exclamation point that was a part of the show's logo since its creation was phased out. When The WB merged with UPN to form The CW, SmackDown retained its time slot on the new network, but despite the strong ratings it pulled in for the network, it was eventually booted off. The show moved on to MyNetworkTV, where it usually beat the Friday night lineup provided by The CW in ratings; but even this could not save the fledgling network. MyNetworkTV became a syndication service in the 2009-10 season, with SmackDown being the only original program on the "network". And in 2010, even that ended; in October of that year, SmackDown moved to Syfy. About a year later, the brand extension was phased out; from 2011 to 2016, wrestlers would appear on both Raw and SmackDown interchangeably, a change that WWE would initially capitalize on, briefly rechristening Raw as Raw SuperShow.

This all changed in 2016. WWE announced a big change; beginning in July, not only would SmackDown be going live (meaning it will now air on Tuesdays, thereby ending the possibilities of "dirt sheets" posting spoilers), but both it and Raw would be separated in a brand extension once again. Two years later, USA Network, who had picked up SmackDown from Syfy in 2015, decided to drop the program in exchange for an extension of their rights to air Raw. Effective October 2019, new episodes of SmackDown will air on Fox, marking the show's return to network television and becoming the first WWE program to air on Fox since two episodes of Saturday Night's Main Event aired on said network in 1992. As part of the move, the show will once again air on Fridays, though this time still broadcasting live as opposed to airing on tape delay.

SmackDown was also the name of WWE's series of video games for the PlayStation and the PlayStation 2 (later Smack Down Vs Raw). The games were WWF SmackDown! (2000); WWF SmackDown! 2: Know Your Role (2000); WWF SmackDown!: Just Bring It (2001); the first SD game on the PS2), WWE SmackDown!: Shut Your Mouth (2002); and WWE SmackDown!: Here Comes the Pain (2003). The first three sequels used various sayings of The Rock as subtitles, while the final game broke tradition by using a Phrase Catcher for Brock Lesnarnote It was actually Tazz who said it, but the Catchphrase is not associated with him.. Following Here Comes the Pain, the series was re-branded Smack Down Vs Raw to emphasize the current multi-brand nature of the company, and eventually went Multi-Platform.

As of April 15, 2022, here is the list of people who perform on Friday Night SmackDown. Michael Cole & Pat McAfee are the commentary team, with Alyse Ashton, Kayla Braxton, and Megan Morant handling backstage interviews, and Mike Rome as the ring announcer.