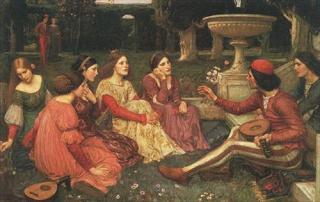 "The bards were feared. They were respected, but more than that they were feared. ...If you'd pissed off some witch, then what's she gonna do, she's gonna put a curse on you... no big deal. You piss off a bard, and forget about putting a curse on you, he might put a satire on you."
"And if he was a skillful bard, he puts a satire on you, and it destroys you in the eyes of your community...and if it's a particularly good bard, and he's written a particularly good satire, then three hundred years after you're dead, people are still gonna be laughing, at what a twat you were."
— Alan Moore
Advertisement:

Older Than Feudalism, the bard is a character within a story that acts as a poet, Wandering Minstrel, storyteller, and/or source of morale for people around them.

In medieval Gaelic and Brythonic culture (Ireland, Scotland, Wales, Isle of Man, Brittany and Cornwall) a bard was a professional poet, employed by a patron, such as a monarch or nobleman, to commemorate the patron's ancestors and to praise the patron's own activities. The word itself is loaned from Scottish Gaelic, deriving from the Proto-Celtic bardos, ultimately from Proto-Indo-European, which roughly translates as "to raise the voice; praise." Similar societal roles could be observed throughout numerous Indo-European cultures, with the Norse Skalds and Indian Bhāts as prime examples.

In game cultures such as Dungeons & Dragons, the Bard is a versatile character able to both fight strategically and cast magic through the power of their songs, suggesting them to be magicians who use the power of emotion and creativity to conjure miracles into the world.

"The Bard" is also commonly used to refer to Robert Burns in Scotland, and to William Shakespeare throughout the broader Anglosphere.

The Storyteller is a supertrope. See also Wandering Minstrel.