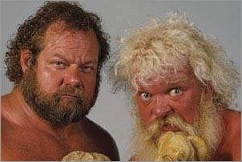 L-R: Moondog Rex, Moondog Spot
"You better watch out for the Moondogs
Or you'll meet your maker tonight"
Advertisement:

The Moondogs were a Professional Wrestling Tag Team that started in WWF before making its home in Memphis. It started in 1981 with Moondog King (Ed White) and Moondog Rex (Randy Culley), until White was unable to enter the U.S. from Canada. As a result, they brought in Larry Booker to replace him as Moondog Spot. They had one run with the WWE World Tag Team Titles

, defeating Rick Martel and Tony Garea on March 7, 1981 and losing them back on July 21st. Rex and Spot then went down to Memphis, where they became pioneers of hardcore wrestling, with one wild, vicious brawl after another. Culley went back to WWE in 1987 to create Demolition, but he had to be replaced because too many of WWE's Northeastern fans recognized him under the face paint. Over time, the team came to include Moondog Spike (Bill Smithson), Moondog Cujo (Lanny Kean, aka WWE's Cousin Junior), Moondog Splat (Bill White), Moondog Rover (Paul McKnight) and many others.

In total, the Moondogs would hold the USWA World Tag Team Titles