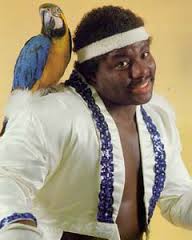 James Ware (born June 20, 1957) is a retired American professional wrestler from Union City, TN who competed from the 1970s through the start of the 21st century as Koko B. Ware. He started in the territories, working in Georgia, Mid-South, Memphis and elsewhere. He was primarily a midcarder, though he held several regional titles. He arrived in WWE in 1986, where, despite being very popular, he was pretty much stuck forever in midcard Jobber mode, including being the first-ever televised victim for The Undertaker, at Survivor Series 90. He stuck around until 1994, though WWE's interpromotional relationship with Jerry Lawler's USWA led to him defeating Kamala for the USWA Unified World Heavyweight Title

, and then winning it a second time from Lawler himself. He went into semi-retirement in 1995, and eventually retired for good in 2009, being inducted in WWE's Hall of Fame in the same year.