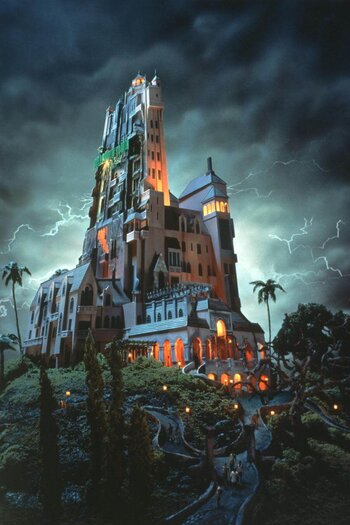 The one hotel on the Disney Resorts you won't check out of any time soon.
"You are the passengers on a most uncommon elevator about to ascend into your very own episode of The Twilight Zone. One stormy night long ago, five people stepped through the door of an elevator and into a nightmare. That door is opening once again and this time it's opening for you."
— Rod Serling
Advertisement:

Ever dreaded being in a falling elevator? Well, Imagineers at Walt Disney World developed a thrill ride that simulates that very experience and turns it Up to Eleven. Submitted for your approval, The Twilight Zone Tower of Tower; a popular simulated freefall drop tower at Disney Theme Parks based on the classic anthology series, The Twilight Zone. Opened in 1994 at Disney's Hollywood Studios (formerly Disney-MGM Studios until 2008), it was an instant hit among parkgoers and remained a Disney park icon since. Twilight Zone creator, Rod Serling (voiced by Mark Silverman) hosts the attraction taking you on a bizarre, horrifying tour of the "5th Dimension".

In 1939, the Hollywood Tower Hotel was the premier getaway for showbiz A-List. The legend goes that on the stormy Halloween night of that year, five people: a celebrity couple, a little girl with her nanny and a bellman, were all aboard one of the main elevators when the building was struck by lightning, making entire wings of the hotel vanish and their elevator plummet into oblivion. The hotel has been closed and left abandoned since that horrible accident. Decades later, the hotel is a haunted, broken-down relic of Hollywood's Golden Age looming over Tinseltown at the end of Sunset Boulevard. Recently, however, the hotel has mysteriously become active inviting you to stay using the still-operating service elevators. Once onboard, guests experience what happened that horrific night years ago as they traverse past the confines of reality and into their very own special episode of The Twilight Zone.

The ride has the distinction of being the first theme park attraction popular enough to get a film adaptation in an inverse of movie-based rides. Filmed partially on location, the 1997 TV film Tower of Terror, starred Steve Guttenberg and Kirsten Dunst. In 2021, it was announced that Scarlett Johansson will produce and star in a new film adaptation of the ride. Josh Cooley, director of Toy Story 4 and writer of Inside Out is working on the screenplay.

A Trope Codifier of Hell Hotel and Evil Elevator, there are currently three incarnations of the attraction at Disney parks throughout the world.

Not to be confused with the Real Life Hollywood Tower Apartments

, a landmark L.A. apartment complex said to have also partially inspired the ride as well.

You are about to discover what lies beyond the fifth dimension; beyond the deepest, darkest corner of the imagination...in the Tower of Tropes:

Rod Serling: A warm welcome back to those of you who made it and a friendly word of warning, something you won't find in any guide book; the next time you check into a deserted hotel on the dark side of Hollywood, make sure you know just what kind of vacancy you're filling or you may find yourself a permanent resident...of the Twilight Zone.